Getting a table at Restaurant Story (201 Tooley Street) was remarkably easy. After all the hype around its opening last year – it took the Guardian 70+ phone calls to make a booking – I wasn’t expecting success on my first attempt. But it seems things have calmed down since then, because all I did was log on to the website at 9am on 1st November – when reservations opened for January – and hey presto: table booked for three months down the line.

After that, the only decisions to make were what wine to go for and whether to have the 6-course menu (£60) or the 10-course (£80). We decided to go for one of each and a bottle of Bergerac – one of the cheaper reds on the menu but still really good.

Now, £80 for 10 courses seems like a lot, I know. But from the moment we sat down and opened the wine menu, a stream of waiters started bringing us pre-starters – eight in total – and throughout the meal there were little surprises, like a ‘pre-dessert’ palate-cleanser and a post-dessert treat. So 10 courses soon became 20, making it actually really good value.

Among the canapé-sized pre-starters were Story’s take on frogs’ legs, a ‘rabbit sandwich’ and something called a ‘Storeo,’ which looked like an Oreo but was in fact a squid-ink biscuit with smoked eel mousse. (I felt a bit intimidated to photograph any of these amuse bouches, but if you’re interested you can find plenty of pics on this blog post. As you can see, I did take a few photos later – I figured it was fair game once everyone around us started getting their iPhones out.)

It was all very Heston – the food at Story does not taste as it looks, and most of the time I had no idea what I was eating because the waiters reeled off the ingredients so fast and in such a wide range of accents that I often only made out one thing and then promptly forgot it.

The pre starters were good (especially the frog’s legs and the polenta crisp with bacon jam and ‘malt soil’) but I must admit I felt a tiny bit sick after the pork-blood pudding and the rabbit sandwich – both pretty rich and a lot for an empty stomach to handle.

Next came the 10 courses, starting with ‘Bread and dripping’ – the bread being sourdough and the dripping an entire, lit candle made out of beef fat, which dripped into the candlestick holder to allow for dipping. This course also came with a relish of biltong and some sort of jelly, which was a bit like catfood and definitely not my cup of tea.

Over the next five savoury courses we had scallops, mashed potato, Jacob’s ladder beef steak and even a foie gras brulee (which I ate very guiltily). The Heritage potato with turnip and charcoal was probably the best mash I’ve ever tasted, but probably also had the highest butter-to-potato ratio.

My favourite dish was the ‘Onion, apple and Old Tom’ – sort of caramelised onions made to taste like hotdog onions at a fairground with the most unexpected but amazing accompaniment of Old Tom whisky poured on top at the table.

The courses are by no means tiny – in fact some of them, like the beef, are pretty big – but it’s all done so cleverly that you don’t end up feeling too full. Stodgier, richer courses are interspersed with palate-cleansers like the scallops with marble-sized cucumber balls and ‘dill ash,’ meaning you can fit more in than you might expect.

Before dessert, our lovely Italian waiter turned up and plonked down a very large block of oozing cheese and said it could be ours for an additional fee. Since he didn’t say how much, and since the meal was already shaping up to be rather expensive, we turned it down, but it did look like a seriously good block of cheese, and I’m slightly regretting not taking it now.

There were also another two optional courses that could be purchased for £15 each to make the 10 courses into 12, but we turned those down too.

The three desserts were all kind of similar to each other and completely different to any dessert I’ve had before – certainly no chocolate cake in sight.

Most intriguing was the mysteriously named ‘Almond and dill,’ which the waitress placed in front of us and said ‘Everything green is dill, everything white is almond.’ The dish consisted mostly of ‘snow,’ which was like the biscuit base of a cheesecake flavoured with dill and almond, plus some almondy sorbet. It was really refreshing. 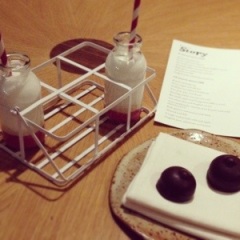 Rhubarb and custard and chocolate teacakes

Finally, instead of petit fours, we were served an additional two-in-one course of rhubarb-and-custard layered desserts in miniature milk bottles and a dark-chocolate teacake with rose marshmallow that looked like a tiny boob and was otherwise like a Walnut Whip. Amazingly, we polished off every last bite.

I’m glad I didn’t read any reviews before I went to Story because it was great to be surprised by all the additional courses, which were nothing short of mind-blowing. I wouldn’t say the atmosphere at the restaurant was particularly impressive, though the view of Shard is fantastic – get a window seat if you can. 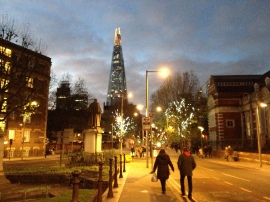 The view of the Shard

The waiters were all extremely friendly, unpretentious and competent and the owner Tom Sellers even brought out a few dishes himself. The only thing I’d say is we weren’t offered any more wine after we finished our bottle about seven courses in, nor were we told that our bottle had finished. (The sommelier kept the bottle out of sight and kept topping us up).

Story is amazingly worth it for the experience, but I’d advise you to get in there quick as the prices are increasing at quite a rate – the 6-course menu was £45 when it opened last year, it still says £55 on the website and it is in fact currently £60. It’s still great value for what you actually get, but nevertheless that’s quite a price hike.

Price for two people for dinner with one bottle of wine: £200+, including 12.5% service

Recommend? Yes – but do prepare your stomach and your wallet in advance